Though the average motorist might not pay much attention to roadside barriers along highways or construction sites, the reality is that these barricades can prove life-saving. Plastic barriers made from high-quality polyethylene can prevent or limit the damage from car accidents. Water-filled barriers in particular can make car crashes less severe, and can often offer a much more viable option, even up against concrete barricades.

Water-filled longitudinal channelizing devices (LCDs), commonly known as water barriers, were first developed by the Federal Highway Administration (FHWA) as an alternative to concrete jersey barricades. LCDs, molded from high-density plastic and filled with water, perform much differently in a crash than concrete barriers. Unlike concrete barricades, they act to absorb impact and deform during a car accident. This mitigates the high G-forces experienced by objects during a crash. Testing by the National Cooperative Highway Research Program has actually shown that vehicle impacts with LCDs generate roughly half the G-forces of impacts with concrete barriers.

Plastic LCDs are also able to form continuous lines around construction sites and along roadsides. This makes them preferable to traditional channeling methods (cones, drums, etc.) that leave open spaces in between devices and can be confusing for drivers. 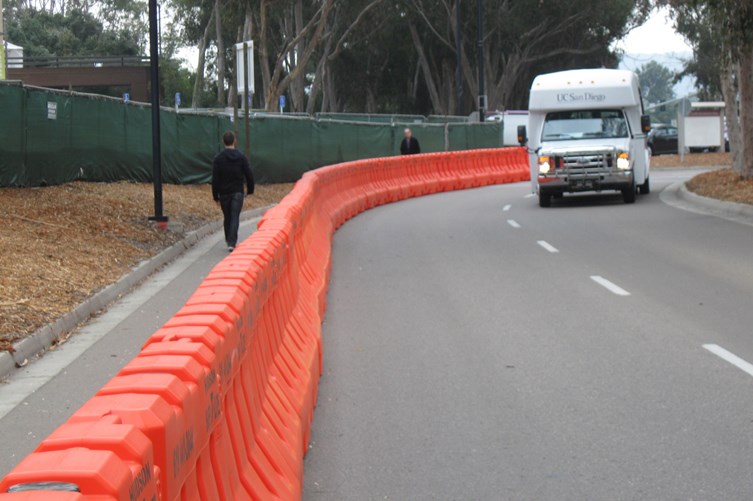 Barricades in high-speed zones help keep drivers and pedestrians safe. Plastic, water-filled barricades are the perfect solution for these situations because they are highly visible, heavy, and absorb shock on impact. There are two types of standard barricade shapes for roadway construction –– the Jersey barricade and the F-shape barricade. Both are designed to allow vehicles to roll up the side of the barricade on impact rather than smashing into it and forcing a hard stop.

The traditional choice for traffic barricades are concrete and cable, but in accidents where drivers collide with either of these, there is a staggering 30% fatality rate. Water barricades are a high-value option that can save lives in high-speed traffic zones. Construction sites require barricades to help direct vehicles and prevent pedestrians from wandering into potentially dangerous zones. Water-filled barricades are lightweight when empty and make maneuvering around an ever-changing construction site fast and easy. When empty, some of our plastic barricades weigh around 70lbs. When filled with water, though, they can exceed 900lbs. Also, OTW barricades allow for extra safety features –– such as an attachable steel fence panel to deflect debris and hazard lights for low-visibility conditions. In addition to their improved safety capabilities, water-filled barricades offer several further advantages such as:

There are a number of situations where water-filled barricades can be used safely and effectively. All of OTW Safety’s barricades are plastic and able to be filled with water in order to provide the greatest range of utility and formidability for our clients. Browse our products here!